Once upon a time, before the site that was hosting my audio files lost them all, there were 1174 names to listen to. I meant to restore them bit by bit, but it was so time-consuming and disheartening that I gave up. I still managed to restore 83 of the most popular names.

The 17 Best Perfume Blogs in StyleList

I don’t get much feedback here so it’s nice to be recognised. I was really chuffed when I stumbled upon this page in the StyleList*, by chance, the other day. 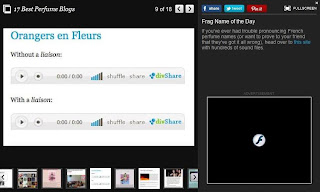 The caption reads, ‘If you’ve ever had trouble pronouncing French perfume names (or want to prove to your friend that they’ve got it all wrong), head over to this site with hundreds of sound files.’

*The relevant page is now gone for some reason.

Labels: Blowing my own trumpet

And then there is this...


A word of caution about Forvo. I haven't tried it thoroughly, but even if a few of their pronunciation files are as inaccurate as the one for ‘Chypre’, which the Belgian speaker pronounces as ‘Chypré’, then you shouldn’t really use the site for French.

There are other such sites out there. Because most of them use chopped-up syllables stuck together to recreate the words you want to hear pronounced, they are totally unreliable. In the case of isolated words, the stress is bound to be in the wrong place, and, in the case of strings of words, the liaison will be missing, which will render the pronunciation useless. Sites that actually use speakers to say specific words are to be approached with caution too - unless you want to sound like Céline Dion (they seem to favour French Canadians for some unfathomable reason).

Labels: Blowing my own trumpet

These three lovely words relate to bottle-sealing techniques. For a detailed explanation of what they involve, please visit Bois de Jasmin.

The Season 3 Finale featured a perfume called Clair de la Lune. The production values of that delightful series are extremely high, but, in this instance, someone should have mentioned to the makers that Clair de la Lune doesn’t mean anything. They obviously had ‘moonlight’ in mind, but the correct translation for that word is clair de lune (as Debussy, being French, knew very well).

Just in case you wanted to discuss the guy's lack of ethics viva voce, this is how his name is pronounced. It's DuchAUfour, not Duchafour (just like it's Audrey TAUtou, not Tatou).

View my complete profile
This site is devoted to French perfumes and designers - whether or not their names have a foreign origin.

My credentials? I was born in Paris. I do not have a regional accent: what you’re hearing is French RP. I read the news on the BBC French Service in the late 1980s and recorded a bestselling BBC French Travel Pack cassette in 1990. I am a published and broadcast literary translator of over 45 years' standing... so words are my thang.

My Other Web Pages (both defunct)